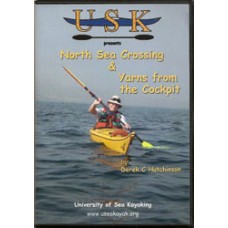 Anyone who gets into a sea kayak today has been influenced by Derek Hutchinson whether they know it or not. Derek Hutchinson is considered by many the "Father of Modern Day Sea Kayaking." Among his many firsts, crossing the North Sea is one of them.

Derek has captured audiences around the world when he tells his tale of this record breaking adventure. Since Derek is an excellent story teller, we have also included more stories in "Yarns from the Cockpit" to complete this two-disc set.

Included with these wonderful stories is a very personal interview with Derek filmed in Aug of 2010, where Derek share stories of his youth and reflects upon his years in kayaking. This set of DVD's not only provides 4+ hours of enjoyment, they represent a piece of living history in the world of sea kayaking. If you are a true sea kayaker we are sure you will love listening to Derek spinning his yarns.


Your Review: Note: HTML is not translated!

Enter the code in the box below: